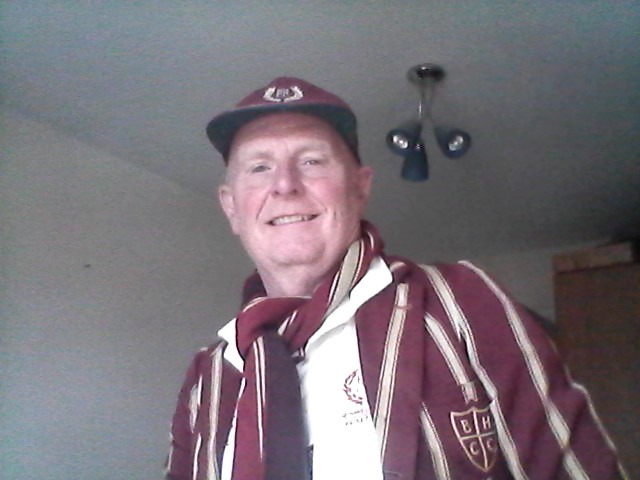 The latest Q&A is with Barry Evans. Barry is the fifth highest amateur wicket-taker in Hill history with a total of 497 League wickets, with only Hill legends Stewart Allen, Tom Hounsome, Hugh Dyson and his own father Alan Evans in front of him.

Q1. How many years have you been a member at the Hill?
A1. Sort of 50 years from when Dad and Stuart Robertson reset up the Juniors.

Q2. What other clubs/teams have you played for?
A2. County Club.(I got sick of watching the very good Dyson and Allen bowl all day). Ipswich and East Suffolk CC, and Scunthorpe CC. If you ever leave the Hill only go to a side who are at least as good, unless you are rubbish.

Q3. What’s your best performance for the Hill?
A3. Believe it or not, I think it was scoring a hundred against a good Haltwhistle on a shit tip at Stamfordham. With hindsight I don't think I really liked bowling. It was just like a bloody job that had the only benefit of taking time out from fielding.

Q4. What was your most memorable game and season at the Hill?
A4. The first game of the season against County Club at the Hill in 1996, the season that we won the league. I bowled 21 off the trot and could not walk for days. I knew then we had the side to win the league. Winning is all that matters despite what Secretary Shaw suggested in his offering.

Q5. Best player you have played with for the Hill? and elsewhere?
A5. Shahid at the Hill. Mushtaq Mohamed when I had a season at County Club. I did a lot of bowling at the other end to him and took great delight in watching him bamboozle very good players with his leg spin. His googly was genuinely impossible to spot.

Q6. Best player you have played against? Batsman, Bowler and WK?
A6. Richie Richardson, Ian Callen, Kevin Corby. I played against Ian Callen (the summer before he went on to play State cricket and then for Australia) on a very hot day at Jesmond after an early collapse from the girls up top. I batted for some time with Chris Gray, not ever seeing the ball to this day. He was measured, I think, a couple of months later back in OZ at well over 90 MPH. This was pre helmet days. Madness.

Q7. Most feared opponent’s when playing for the Hill or other team?
A7. Alan Thompson he always, and I mean always, got runs against me.

Q8. Best ground’s played at?
A8. Always liked Jesmond. As well as being a great compact ground, the even run ups with the slight rise to the square, gets you in a great position bowl if you commit to your action and follow through. I had very good stats their despite the Parrott and Nicko thinking otherwise.

Q9. Team you always love to beat?
A9. Tynedale, too many incidents to mention them all, but a couple stand out for wrong reasons.

Early in my 1st XI career Alec Johnson ran me out when I was patting down the wicket after a delivery, the ball went through to the wk, who passed it to Alec at slip, he then feigned to throw the ball from slip to a fielder, so I went to attend to pat down the wicket, he walked to the stumps and claimed a run out. I was not best pleased with local umpire as I was given out. To be fair even some of the Tynedale supporters were less than pleased with the mode of the dismissal, so it must of been bad.

I also bumped in to former Tynedale player Phillip Raine last year who admitted to once catching me six foot over the line and claiming the catch, for me then to be given out by one of the many umpires from Hexham. Where he caught it at square leg if he had been 3 yards to the right he would have been on someone's f...….g sofa. You all know the house I am talking about at Tynedale. He is now a good bloke and at least admitted that he was way over the line.

I dare not share my full thoughts about the day when our chairman might have been killed by Ian Bishop. I will say however that Ian Bishop as an youngster was blameless, he was just an employee!!!! It was good to go back some years later to stand in the slips with Simon and Steve Dunsford watching Gary Gilder have them on their toes. He had also smacked them with the bat. A great day. He was worth every penny for that day alone.

Q10. If you could make one change at the Hill what would it be?
A10. Let me sort the drainage out on the square.

Q11. If you could make one change to NEPL what would it be?
A11. As with Professor Shaw 50 or 55 overs win or lose. Forget the purists. Time has moved on. People might actually watch it.

Q12. Advise for young cricketers?
A12. Get as fit as you can to do your job right.I am sort of with Shaw in saying enjoy it. You only however really enjoy it when you win. Advice to batters is find a way to get to ten runs as many times as you can in a season. If you do that you will have your best season in terms runs aggregate. If you don't score 10 you definitely don't score 50.

Q13. Favourite cricketers of all time? Batsman, Bowler and WK
A13. Stokes,Warne, I have not got a favourite wicketkeeper as all they do is catch the ball with big gloves, and so they should. like a base player in a band you need one, but who gives a shit who he is.

Q14. Your best ever Hill XI?
A14. The year we won the Northumberland County league. We were already a goodish side with Chris Craven returning for his second season and with the introduction of return of Phil Nicholson, the Window twins, Aussie Jarrett, Lee Crozier and Swampy Marsh we became a very good side. It was unfortunate that some of the older brigade, such as Keith Shaw and John Charleton missed out making way for these young'uns. It’s simply about the winning!

Q16. Your best ever NEPL XI?
A16. Too difficult. To name a few Humble, Crozier, Graham, Whiteman, Nicko and for fun we have to have Golly and Quentin Hughes in the side.

Q17. Your best ever England XI?
A17. The side that won back the Ashes. Whilst England had a very good side, it was the introduction of Simon Jones that just added that something special. Their batters had nowhere to go. It’s still simply about the winning!!

Q18. Your best ever World XI?
A18. Too difficult but how about a team made up from these players I have played with or against.

With Dilip Doshi for Northumberland

With Musghtaq Mohamed for County Club

With Shahid Nazir at BHCC

With Roger Tolchard at Empingham CC in a charity match where I sat next to David Gower at Lunch with Les Jowsey and Doug Hudson. It was Gower's Sunday rest day in his third test. He got properly stuck in to the red on offer (all day)

Q19. Desert Island Album ? Song ? Book ?
A19. MUSIC - I am currently really in to Lizzo, seriously. Song "my way" obviously. BOOK The Art of Fast Bowling by Dennis Lillie. I was given it for my 21st Birthday. It was the first real bit of scientific work done in this field. It is actually still valid. Key Point. fast bowlers should swim, swim and then swim in the winter.

Q20. Finally, funniest memory on a cricket field?
A20. Me catching Wayne Falla with a good catch "by my standards" off Lee Crozier and then going off on a footballer type run as if I can just scored in a cup final. What a TW*T.

Disclaimer - The views expressed in this article are solely those of the indivudal being interviewed, and do not represent those of Benwell Hill Cricket Club. Any views or opinion are not intended to cause offence to any individuals or organisations.