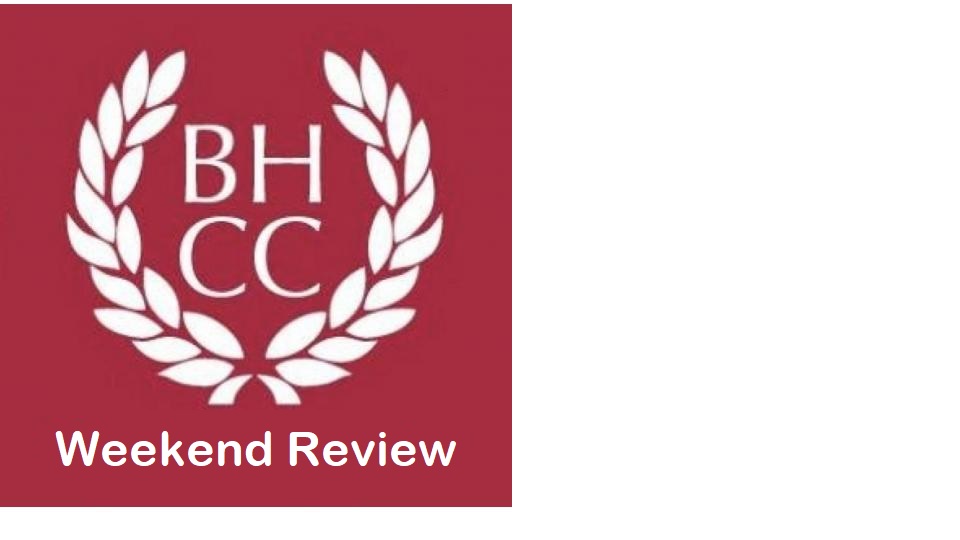 Friday evening saw another NEPL T20 lost to the weather, and it was a frustrating Saturday for all the teams, with early evening rain showers preventing a certain victory for 1s, likley victory for the 3s, and the chance of a big run chase for the 2s. Sunday saw another vistory the NEPL 3s away at Jesmond.

Vince Howe of Tynemouth CC provided the following match summary of the 1s game away to Tynemouth:

TYNEMOUTH SAVED BY THE RAIN

A full strength Tynemouth side was comprehensively outplayed on Saturday at Preston Avenue by Benwell Hill but once again the rains came , on this occasion to save the home side from near certain defeat.

Following torrential rain for most of the week and despite the sterling efforts of Groundsman Paul Jackson, the Umpires considered parts of the square and ground to be unfit to start on time so Play did not begin until 2.15 pm instead of the scheduled 12 noon start. tynemouth skipper Ben Debnam won the toss and having chosen to insert the visitors would have been happy with the start as first Wesley Bedja ran out James Schofield with a superb pick up and throw and then Finn Lonnberg had Adam Heather caught behind by Matty Brown to leave the Hill struggling at 28/2. Lonnberg produced another fine spell of skilful and accurate medium paced bowling from the Golf Course end finishing with the excellent figures of 10 overs, 2 maidens, 2 wickets for just 12 runs. However after his fine spell the rest of the bowlers struggled as a fine partnership of 67 was put together between former Durham Captain Will Smith and Scotland and Hill Captain Kyle Coetzer MBE. Whilst batting was tricky these two experienced campaigners proved it was possible by showing good technique and courage to get in line and the concentration to occasionally attack when something loose came along. Coetzer for once was happy to play second fiddle and Smith, fully in tune, combined rock solid defence with some classical shots to leg. His score of 65 was the best innings of the day by far and a total of 149/6 off 42 overs looked above par.

However no one could have envisaged what happened next as Hill/Durham Academy seamer Luke Doneathy ran through the Tynemouth top order like the proverbial knife through butter. A terrific spell of lively seam bowling saw him finish with the remarkable figures of 5 wickets for 6 runs in 7 overs. Good lines and lengths were maintained through his fine spell and his wickets included the prized one of Mike Jones.

At 25/7 the game looked all over however a heavy shower stopped play and although the players did return to the field an hour later , Andrew Smith and Barry Stewart survived long enough for another shower to arrive which signalled the end of play for the day with the home side on 39/7.

The 2s were at 95 for 2 chasing 245 to win when the rain struck in their game. Tynemouth batted first, posting 244 for 5 in 52 overs,  Pete Jones 12 overs 2 for 43 the pick of the bowlers, there was also a wicket each for Joe Kilpatrick Jeff Mason and David Haxon. Our reply started well with Joe Moore scoring 36 and Ben Mussett going well at 47no, with 33 overs still to bat and 8 wckets in hand it promised to be a great finish until the rain won the day again.

The West Tyne 3s were the first team to be hit by the rain on Saturday, with only half the game possible, we posted 180 in our first innings against South North. Full scorecard details not available at time of going to press!

The NEPL Sunday 3s once again got the best of the weekend weather, and took full advantage with an excellent win at Jesmond v Newcastle. Lots of solid contributions (Jeff Mason 31, Joe Fletcher 27, Haydon Mustard 25 to name but a few) saw the Hill post a modest 158 batting first. However our bowling was on fire, as we skittled Newcastle out for only 88, with all the bowlers taking a least 1 wicket (Will Archbold 3 for 9, Andy Jewitt 2 for 17, Jeff Mason 2 for 20, Chris Pounder 2 for 24 and Haroon Malik 1 for 14).