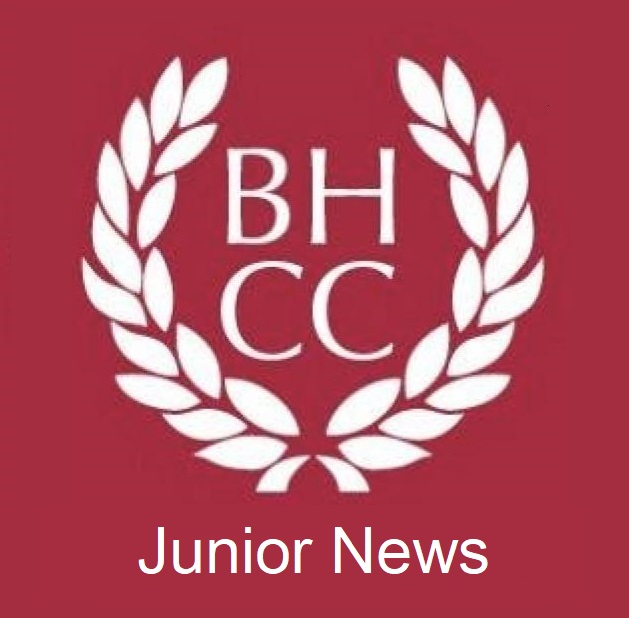 Its been a busy few weeks for the juniors, here is a quick round up of recent games.

Monday 31 May - Where better to start than a second Hill century for Haydon Mustard for the Under 15s against Tynemouth. The Hill were set 174 to win in the 40 over NEPL U15 Shield Group A game. Owen Blackburn picking up 2 wickets, and 1 each for Luke Nellis, Abu Siddique, Sam Rowe, Ibrhaim Tayabb and the aforementioned Haydon. However that was just the starter for Haydon, as set about the Tynemouth bowlers, scoring a superb 102 before he had to retire, with Freddie McGregor's 38 not out, the Hill reached their target with 7 wickets and 10 overs spare.

Wednesday 2 June - the Under 15s were quickly back in action against South North a couple of days later in the 20 over Northumberland Junior League. In a close game we fell to a narrow 13 run defeat. South North batted first posting 132 for 5, Abu Siddique with 2 wickets, Owen Blackburn and Fardin Bhuiyan taking 1 each. With Haydon missing from the line up we batted well but were never ahead of the rate, and finished at 119 for 7. Will Bulman top scoring with 35, Fardin Bhuiyan with 20, Rory Mustard with 17 and Owen Blackburn with 17 the top scorers.

Monday 7 June - a third trip to Tynemouth for Baz and the U15 team in as many weeks, this time in the 20 over Northumberland Junior League fixture. Once again missing skipper and main batter Haydon the team fell 31 runs short in a run chase. Tynemouth batted first scoring 132 for 3 in their 20 overs, a wicket each for Abu Siddique and Luke Nellis. Depsite an excellent 51 not out from Freddie McGregor, we failed to build partnerships with only Jayam Patel (17) reaching double figures, as we finished on 101 for 4.

Sunday 30 May - we had a convincing 38 run win over Stocksfield. Scores of 30 (retired) each for Rory Mustard and Warren Poxon, 22 from Fergus Wallace and 18 from Subhan Shahzad, were main contributors to our score of 117 for 4 off 20 overs. Stocksfield finished on 79 for 4, with a wicket each for Ellie Fogan, Daniel Warkman and Fergus Wallace.

Friday 4 June - saw another trip to Tynemouth for the Hill in the Quarter Final of the NEPL Under 13 Shield. This time we had a great 102 run win, batting first we scored 207 for 4 in 30 overs. Top scorer was skipper Jayem Patel with 53 (retired), there was also great contributions from Ben Robinson with a breezy 31, Aaron Armstrong with 25, Subhan Shahzad with 22, Ibrahim Tayabb with 20 not out (2 x 6s and 2 x 4s) and Harsh Patel with 14 not out. There was 3 wickets for Aaron, 2 for Ibrahim (in the first over), 1 each for Harsh and Jacob Nellis, as Tynemouth were all out for 95.

Sunday 6 June - was the big showdown in the Northumberland Junior Cricket league against South North A. An 8 wicket defeat looks comprehensive, but it was a battling display from the team, as we recovered from 27 for 4 to set South North 109 to win from their 20 overs, this was laregely down to excellent knocks of 33 (retired) from Warren Poxon and 32 (retired) from Subhan Shahzad. South North chased down the total in the 19th over for the loss of 2 wickets, Ibrahim and Subhan taking a wicket each.

Friday 4 June - away to Ponteland. The Hill batted first and runs were hard to come by due to good bowling and a long outfield. We managed to get to a net score of 226 which included three run outs. Ponteland had got past this score after just over half their overs but a great fight back from the team led to the game coming down to the last ball. Unfortunately we couldn't get a wicket and lost by two runs. We only managed to pick up four wickets and had a couple of dropped catches and missed run out opportunities but the team battled really well.

Sunday 6 June - home game against a strong South North team. Bowling first we managed to restrict South North to a net score of 238 with some great catches and two run outs. Hector got his first wickets for the Hill and could have had more if not for a couple of no balls. We got off to a strong start to our innings with Harsh and Charlie both reaching double figures. It was also really positive to see some solid defensive batting against some good straight bowling. What had looked like being a comfortable win become very tense with the last pair as some fast bowling led to three quick wickets. However Thomas and Hector fought back and led to us to a seven run win.