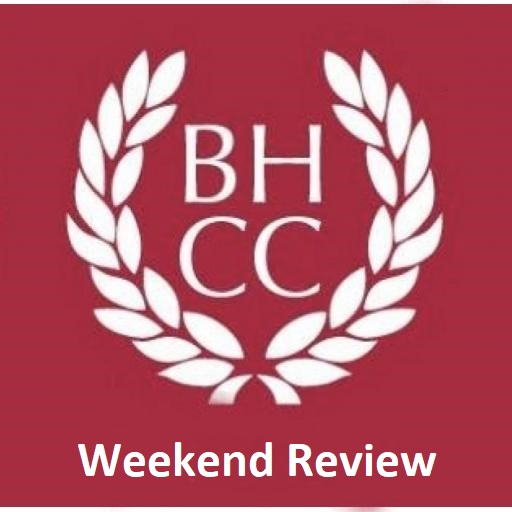 Apologies for late publication of this update, editor error!! It was a scorching weekend weatherwise but very much a hot and cold set of results for the Hill's senior teams. The 1s lost heavily away to Sunderland, but the 2s record a big win at home in the reverse fixture, the West Tyne 3s lose to South North, but the NEPL Sunday 3s pick up an excellent win at Tynemouth, thanks in the main to a superb century from Zain Ahmed. Read on for more details.

On paper what appeared to be one of our easier fixtures for the remainder of the league season, turned out to be anything but as we crashed to a 9 wicket defeat at Ashbrooke.

The home side won the toss and elected to field depsite the hot weather, and the clearly knew something we didn't as the wicket undoubtedly favoured the bowlers in the morning session. A superb 15 over spell from Kieran Waterson, of 4 for 20 which included 10 maidens, did the damage for the home side, as we struggled to a total of 182 for 6 declared in 55 overs. Only Mohsin Mukhtar with 62 and Adam Heather with 46 offering any resistance from the Hill batting ranks.

In reply after some heavy rolling, the wicket changed, althoug in truth some indiffernet Hill bowling and attacking play saw Sunderland chase down our score easily for the loss of only 1 wicket in the 37th over. Dan Shurben top scoring with 93 not out. Rory Hanley in his last game of the season (he is off to Mexico for a year as part of his Uni degree) took the only wicket.

The scorecard is available here https://benwellhill.play-cricket.com/website/results/5024341

After 3 weeks away from home we returned to face Sunderland at the Hill. The forecast was good and a new wicket was prepared, we lost the toss and surprisingly were asked to bat.

Early indications however were that the wicket was not going to be easy with the Sunderland opening bowlers getting the ball to tick in the wicket. Joe Moore was the first to go nicking a good ball for 29 from 33. McGregor soon followed for 9 playing over one from the off spinner. Hynd and Aatif started to build a base and Hynd was next out for 38 leaving us 114/3, Nadella hit a full toss to point for 7, bringing together Fletcher and Aatif who put on 78 quickly to take the game away from Sunderland before Aatif was out for a well made 79 from 101, leaving us 205/5, Fletcher was then out for 41 from 40 and a couple of others perished trying to up the rate in the final few overs as we declared on 225/9 in 50.

Hunter and Kitchen opened the bowling and Hunter started well removing 2 quickly, Kitchen couldn’t get his radar correct and was replaced by Safi.  However Hunter had Sunderland hopping around and had reduced them to 40/4 with all 4 wickets.  Safi chipped in with 2 quick wickets and when Lockey struck after drinks Sunderland were in trouble at 61/7 with a lot of overs to face.  Some wayward bowling and bad catching allowed Sunderland lower order to pick up some boundaries before Safi picked up his 3rd and Hunter ran out the number 8 who had tried a few times to run someone out! Sunderland were now 86/9 and the 10 and 11 set out to frustrate by seeing off both Hunter (4/32) and Safi (3/29).  However Nadella came on and produced an excellent delivery to bowl the no 11 and bowl out Sunderland for 119 with 20 overs remaining. Another good 30 point win and some strange results mean that its all to play for with 46 points covering the top 6 sides.

The 3’s made the short trip to Greenside on Saturday to face South North in the West Tyne League. After losing the toss we were asked to field and started brightly reducing South North to 22/2 in the 6th over however a couple of major partnerships of 120 and 55 would eventually see South North finish with 241/6 in 40 overs with wickets for the hill going to the skipper with 3/30 Taylor 2/59 and Zain 1/46.

In reply the hill lost their first wicket for 78 in 12th over with Rash departing for 36 followed next ball by Taylor. Unfortunately we would eventually fall short losing by 54 runs. Andy Dawson top scoring with 53 the best performance with the bat followed by Zain with 48.

The scorecard is available here https://benwellhill.play-cricket.com/website/results/5295110

The NEPL 3s recorded a terrific 129 run win against Tynemouth on Sunday at Preston Avenue. We batted first posting 246 for 8 in 40 overs, with Zain Ahmed scoring a superb 107 off 94 balls with 14 x 4s and 4 x 6s, there were also some useful middle order contributions to help us to what was a formidable total on the day.

Tynemouth lost 2 early wickets, but rallied to 71 for 2 before they eventually collapsed to 117 all out, Taylor Matthews taking a career best 4 for 20, there was also 2 wickets for James Moody, and 1 each for Abu Siddique, Owen Blackburn and Rohan Aatif.