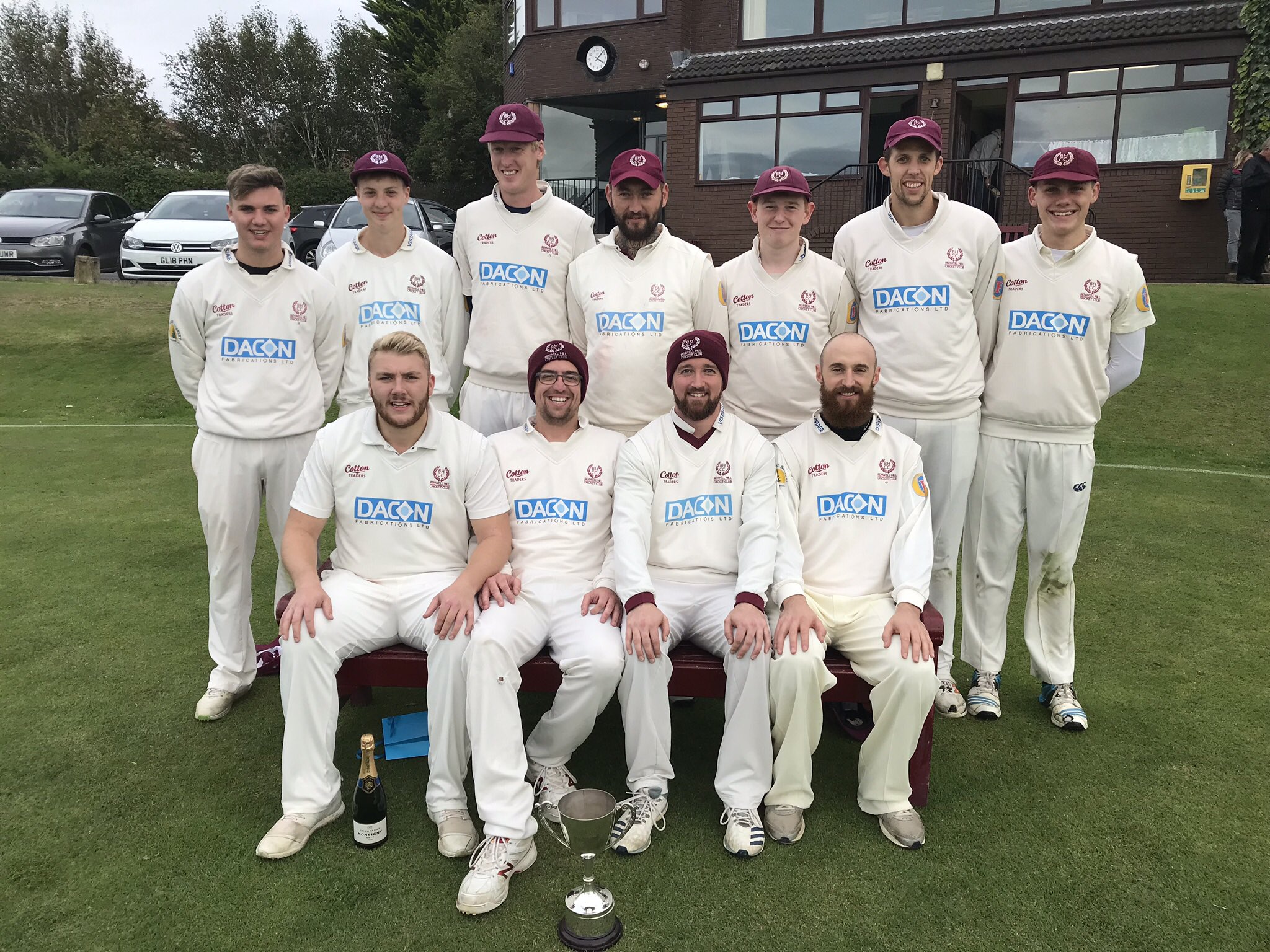 Weekend Review (14-15 Sept) : Four wins out of four on last league weekend of the season, and another Cup Triumph for the 2s

The final weekend of the league season turned out to be the best of the lot, as all four teams won their league games, and the 2nd's won another cup competition in the Roseworth Trophy.

The 1st XI finished the season in 7th place in the league, thanks to a final day victory over Newcastle and Burnopfield's draw against Sacriston. The Hill missing Kyle Coetzer again (on Scotland duty) and Luke Doneathy (injured) batted first and posted 216 for 4 declared in 55 overs, James Schofield top scorer with 82, and there was useful contributions from all other batters, Adam Heather with 35, Peter Halliday with 30, Joe Anderson with 25 and Will Archbold with 19no. Newcastle's reply was in disarray very early and they collapsed to 41 for 6 due to some superb opening bowling from Luke Mussett (5 for 52) and Callum Harding (3 for 19), only some late order hitting from Dan Humble (63no) did they eventually recover to 148 all out, with Rory Hanley picking up the other 2 wickets to fall. Special mention for Pete Halliday who took another 3 catches, to finish top wicket keeper in the league stats with 29 dismissals (all catches).

Thanks to final day victory over Newcastle at Jesmond the 2nd XI finshed the season in joint runner up position with Tynemouth on 366 points, 29 points behind winners South North. Skipper Dawson decided to play the old pack of cards trick for his batting order, and at 6 for 4 things weren't looking great, however a superb century (104) from Anthony Hunter, 61 from Matty Hynd, and late orders runs from Ben Mussett and Andy Dason both with 37, saw us recover to 271 all out in 51.4 overs.

Newcastle finished 91 short at 180 all out, their total largely due to 74 from Ross Sinclair, Joe Torre finshed with excellent figures of 5 for 27, Joe Fletcher 2 for 29, and 1 wicket each for Pete Jones, Harry Reeves and Joe Kilpatrick.

The West Tyne 3rd XI finshed the season in excellent style with victory over Hexham Leazes at the Mill. The victory seeing them move up to 5th in the final league table.

Batting first Hexham posted 130 for 8, with wickets shared Zain Ullah again in the wickets with 3 for 28, Darsh Thiranga took 2 for 19, 1 each for Aqueel Tassawar, Haroon Malik and Chris Pounder. For once we chased with only a little alarm, the calming influence of the returning Davey Ladd perhaps the difference to previous weeks. All the top order contributed to a 5 wicket win, top scorer was Assanka Jayaweera with 33no, Aqueel Tasswar scoring 29, Rashid Shad 21, Darsh 18 and Zain Ullah 12 all helping us to a 5 wicket win.

After triple delight on Saturday it was double delight on Sunday, with the newly crowned NEPL Sunday Division 1 champions winning again at South North, and the 2nd XI winning the second trophy of the season in the Roseworth versus Blaydon.

For the 3rd XI Haroon Malik took 5 for 28, and Darsh Thiranga scored 80 in a tight 2 wicket win at Gosforth.

The 2nd XI won the Roseworth Trophy with an easy 79 run victory over Blaydon at the Hill. We batted first and posted 163 for 2, there were half centuries for Joe Anderson (57no) and Ben Mussett (51), and 37no for Will Archbold. Blaydon were never at the races (!) and finished on 84 for 9 in their 20 overs. The team have a chance of a cup hat trick this Saturday (21st) when they are in James Bell Cup Final action against Lanchester at Bill Quay CC, start time is 1pm